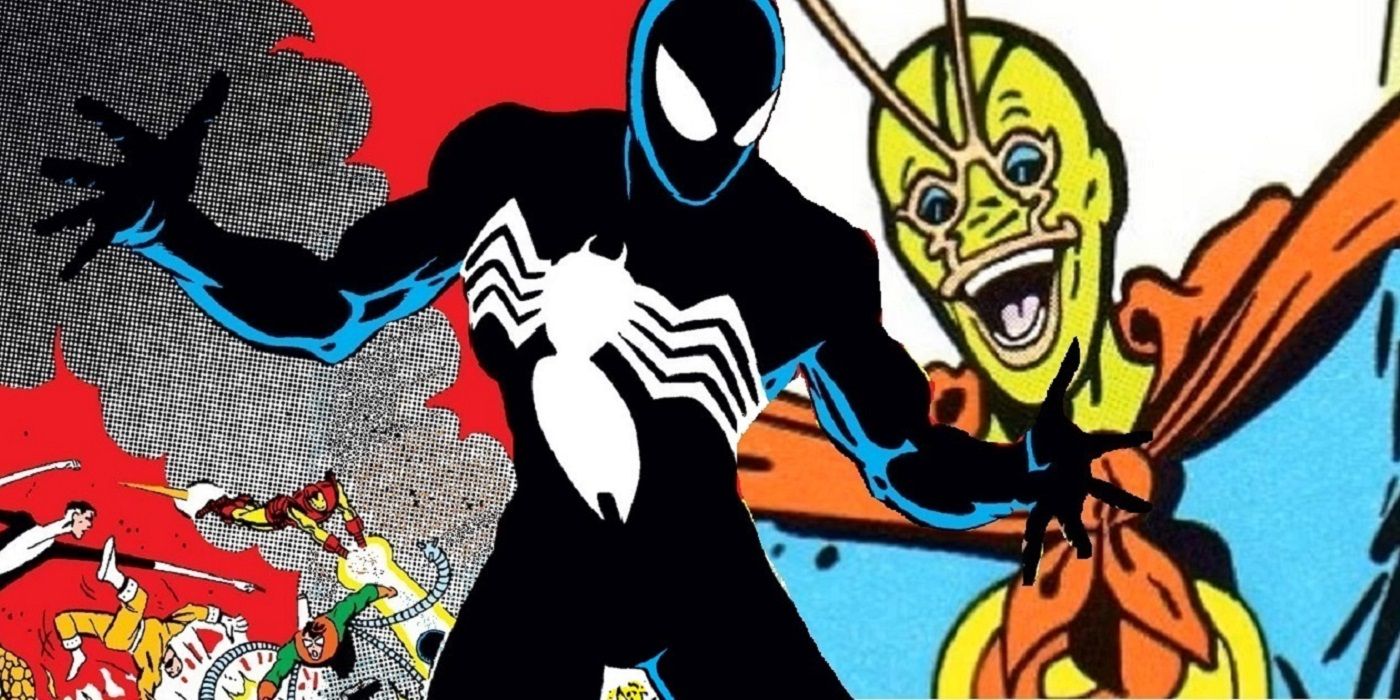 Today, we look at when Ambush Bug made fun of Spider-Man’s then-new black costume in the pages of Action Comics

Keith Giffen’s character of Ambush Bug was used to make fun of the DC Universe a lot during the history of the character, but for one memorable 1984 story, Giffen took aim at the Marvel Universe, instead, and specifically the introduction of Spider-Man’s black costume!

WHAT WAS THE REACTION TO SPIDER-MAN’S NEW COSTUME?

Very early on in 1984 (the final week of January), Spider-Man debuted a new costume in Amazing Spider-Man #252…

This was part of a companywide event called Secret Wars (which was a toy line that Marvel did with Mattel and this was the tie-in to that toy company), where most of Marvel’s major superheroes would go missing at the end of one issue and then return in the following issue (most characters returned right away in the next issue, but some titles dragged the return until the end of the issue), only often with a major change, like, for instance, the Fantastic Four leaving at the end of one issue and returning the next issue with the Thing missing and his place on the team taken by She-Hulk!

The idea is that you would have to read the miniseries, Marvel Super Heroes Secret Wars, to find out what happened to the characters. Of course, the reveals didn’t happen until later in the series (don’t want to give away the cool stuff too soon), and so we didn’t see the new costume debut until Secret Wars #8…

This, of course, is one of those rare examples where the first appearance of the costume wasn’t nearly as collectible as the ORIGIN of the costume, which is extremely rare in the world of collectibles, but damn, Mike Zeck’s cover for Secret Wars #8 is just THAT iconic.

In any event, Spider-Man’s new costume was a sensation, with the initial appearance selling out and leading to Marvel taking what was meant to be a temporary story idea to become a full-time costume change, with Spider-Man remaining in his black costume (simply a cloth version of the alien costume Spider-Man got in Secret Wars) for the next few years (although he would occasionally wear the original costume, as well). It was such a big deal that the news of the costume even apparently traveled to the DC Universe, in 1984’s Action Comics #563!

HOW DID AMBUSH BUG MAKE FUN OF SPIDER-MAN’S COSTUME?

As I noted recently, Ambush Bug was originally created by Keith Giffen for a DC Comics Presents story that he was drawing that Paul Kupperberg was writing. They were looking for an offbeat villain, so Giffen came up with Ambush Bug, who was basically like what if Bugs Bunny was a supervillain. The editor of DC Comics Presents, Julius Schwartz, liked the character and asked Giffen to do a new story with the villain, this time written and drawn by Giffen (with Paul Levitz, Giffen’s Legion of Super-Heroes collaborator, doing the script, as the issue saw Superman team up with the Legion of Substitute Super-Heroes to stop the Bug). The character was now popular enough that Giffen decided to make him a superhero, and after a number of guest appearances in Superman’s titles, Ambush Bug received his own miniseries.

Before he got his own series, though, Ambush Bug first poked fun at Spider-Man’s new costume in Action Comics #563 (Robert Loren Fleming scripted the story, and the great veteran comic book artist, Bob Oksner, inked it), in a story that has some jokes that have aged poorly, but the concept is cute enough.

Ambush Bug was able to teleport through these tiny “bugs” that would fly around, and he could teleport to their location. He is working on them when the bug short circuits, electrifying Ambush Bug’s costume (and also sort of connecting with the TV broadcast signal, those are references to Wendy’s famous “Where’s the beef?” ad, as well as more obscure ads like Burger King’s “Aren’t you hun-gry?” and the jingle for the Super Duper supermarket chain from the Ohio/Pennsylvania/Western New York region)…

With his costume now black, Ambush Bug stats speaking in AAVE, which is the part that has aged pretty poorly.

However, Ambush Bug then makes a clever joke about how he doesn’t know how he got a black costume when he wasn’t even involved in Secret Wars…

He has now gained the ability to teleport without the use of his bugs, which remained the standard for Ambush Bug, powers-wise, for the rest of the character’s history.

Amusingly, Ambush Bug then decides that the way to go is to dress up as a horse, so that people aren’t put out by his new costume…

Ambush Bug, now dressed as a horse, tries to stop a crook, who then freaks out, drawing Superman’s attention, and the Man of Steel is once again forced to get involved in one of Ambush Bug’s annoying schemes (although, now, Ambush Bug is calling himself Black Beetle)…

He then tells Superman a story that is so funny that I’m just going to spotlight it in a whole other edition of Meta-Messages.

Superman then leaves, and the police open fire, feeling that the “horse” needs to be put down…

Luckily, Ambush Bug escapes, and by the time he next shows up, he is back to having a green costume (which is important, as his miniseries debuted soon after this). I sometimes see the “Black Beetle” pop up in wikis as an actual alternate name for Ambush Bug, but I’m pretty sure it was always just meant as a joke, especially since Ambush Bug goes back to normal after this issue (his next appearance, his last before his miniseries, is a fun one in and of itself that I might spotlight in the future).

If anyone has a suggestion for a future Meta-Messages, drop me a line at brianc@cbr.com