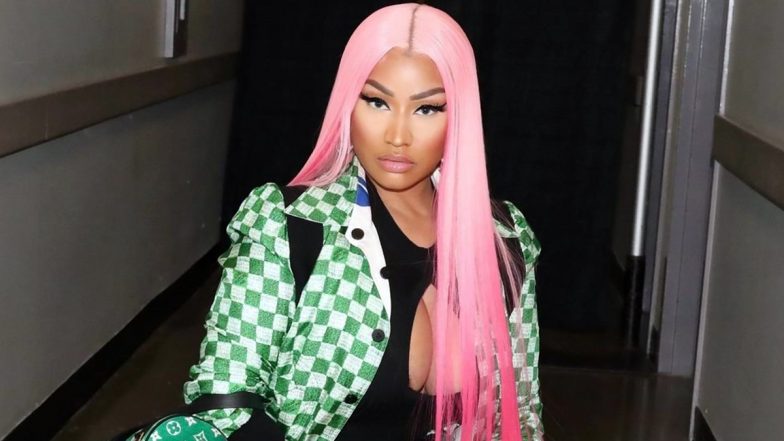 American rapper and songwriter Nicki Minaj has slammed YouTube after the social platform age-restricted her “Likkle Miss Remix” music video with dancehall artist Skeng. According to Variety, taking to her Instagram handle, the rapper has alleged that the company is ‘in bed’ with rival artists’ camps. “Imagine this. They restricted my fucking video but have things a million fucking times worse on their bogus f**king platform,” Minaj captioned her post which was a screenshot of a YouTube community guidelines violation notice. Nicki Minaj’s Husband Kenneth Petty Gets Sentenced to 3 Years of Probation.

She added, “This is what they do to keep you from winning while doing ads for other ppl and posting fake f–king stats. Because the same ppl who run YouTube are in bed with a certain record label and mngmnt company.” Minaj’s own camp did not escape completely unscathed, as she claimed her label has declined to “buy promo for my videos.” Met Gala 2022: Nicki Minaj Puts On A Busty Display In A Black Tulle Gown (View Pics).

According to the screenshot, Minaj’s video was deemed ‘not suitable for viewers under the age of 18.’ It featured a group of partygoers drinking and dancing, with a cast of female dancers joining Minaj in twerking throughout the clip, occasionally joining the male extras in quick, suggestive poses. Later, YouTube removed the age restriction, which issued a statement to Complex saying it had “removed the age restriction after determining the video didn’t violate our Community Guidelines,” as per Variety. Following that Minaj deleted her two fiery Instagram posts.

Minaj and Skeng’s music video arrived on the platform on Sunday, following its appearance as a part of her new 29-track greatest hits compilation album, “Queen Radio: Volume 1“, released via Young Money/Republic Records. This comes on the heels of Minaj’s performance at Rolling Loud NYC over the weekend as the festival’s first headlining female rapper; she was joined by special guests Bia, G Herbo, Fivio Foreign and Uzi, as per Variety.

(This is an unedited and auto-generated story from Syndicated News feed, LatestLY Staff may not have modified or edited the content body)