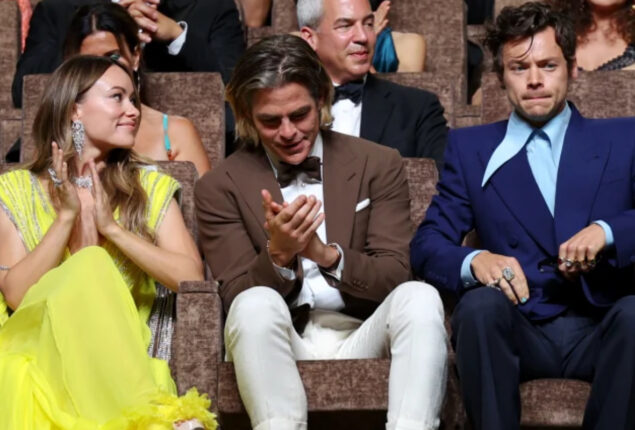 Don’t worry, Darling, which Olivia Wilde is going to direct, has been in the middle of controversies from the start. The premiere of the movie at the Venice Film Festival was the talk of the town after rumours on the internet about the relationships between the main actors and Harry Styles’ “spitgate” with Chris Pine.

For those who don’t know, a video from the premiere of Don’t Worry, Darling went viral on social media, and many people thought that Harry spit on Chris Pine before sitting next to him at the premiere. Soon, the rumoured event became known as “spitgate” on the internet. Soon after, Pine put out a statement calling the claims “ridiculous,” and Harry made fun of the rumour at a concert in New York.

Wilde, who has been promoting the movie, went on The Late Show with Stephen Colbert recently and finally talked about what happened. Wilde talked about the “weird rumours” about her movie and “spitgate” in a sneak peek of her appearance on The Late Show. When asked if Harry had really spat on Chris, Wilde couldn’t help but laugh and say, “He did not.”

Wilde went on to say,  “But I think it’s a perfect example of like: people will look for drama anywhere they can.” When Colbert joked that only time would tell if the rumours were true, she said, “No, he really didn’t!” Styles made a joke about the incident at one of his concerts a while back. He said,  “just popped very quickly to Venice to spit on Chris Pine”, which made the crowd laugh.