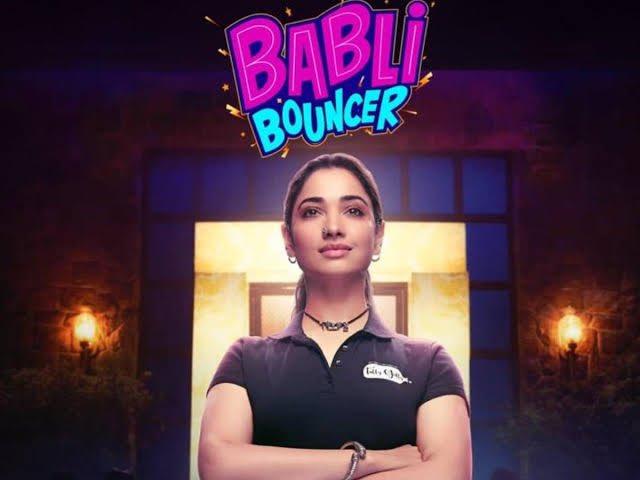 Babli Bouncer is a comedy-drama film directed by Madhur Bhandarkar and written by Amit Joshi, Aradhana Debnath and Madhur Bhandarkar. The film stars Tamannaah Bhatia and was premiered on 23 September 2022 on Disney+ Hotstar.

It is a light-hearted film revolving around a woman who moves to Delhi in the pursuit of a finding a job and makes it big as a bouncer. Babli, who hails from Haryanvi village, trains bodybuilders. Her childhood friend Kukku (Sahil Vaid) loves her, but she isn’t interested in him.

However, she falls in love with Viraj (Abhishek Bajaj), the son of her school teacher (Yamini Dass). In order to be with him, she decided to move to Delhi. The story gets a twist when Kukku’s family approach her parents with the marriage proposal.

Using this opportunity, Babli tells Kuku that she would marry on the condition that he allows her to work in Delhi for a year. She wanted to shift to Delhi to win Viraj’s heart.

After landing in Delhi, she finds a job at Delhi’s Tally Gully Club as they were looking for a female bouncers to handle unruly woman customers. However, she is disappointed after Viraj rejects her. What follows next forms the interesting part of the story.

Known for hard-hitting movies, Madhur Bhandakar’s Babli Bounder is surprisingly different from his earlier works. The film is a ful-filled drama which is quite enjoyable although it has a predictable story. Tamannah comes out with flying colors. Her body language and dialogues are top-class. Saurabh Shukla has done well.

Check out what netizens say about the Tamannaah-starrer:

Sumit Kadel: Fun, Joyful & Entertaining watch ..
@imbhandarkar yet again made a film on a strong women character but this time in a more light hearted manner which also has a nice message on women empowerment. Film will definitely bring smile on your face constantly .

Rohit Jaiswal: #BabliBouncer 3.5*/5 ⭐️⭐️⭐️ ½
Wholesome entertainer with touch of love,drama & most importantly narrative to change perspective of Aam Janta that Yes Women can do Any work @imbhandarkar direction this time has a much sweeter approach,
@tamannaahspeaks Shines #BabliBouncerReview

Vivek Ranjan Agnihotri: Congratulations and best of luck
@imbhandarkar @tamannaahspeaks on the release of #BabliBouncerOnHotstar.
Friends, Madhur and Tamannaah both are in new avatars in this powerful film you can’t miss.