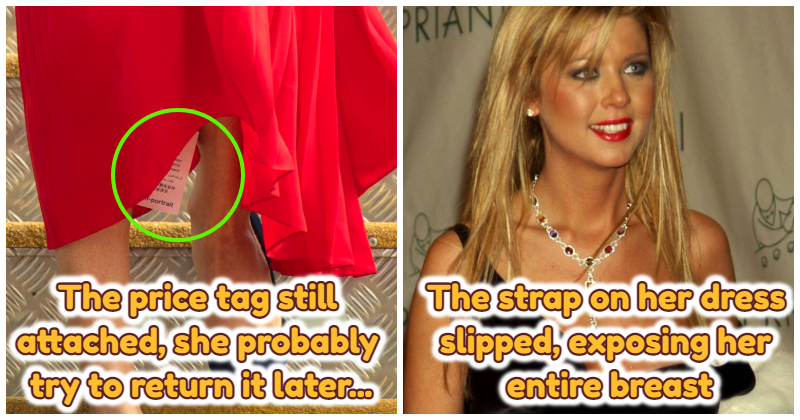 From ripped pants and broken straps to displaying a lot more skin than expected, celebrities have had their fair share of embarrassing wardrobe catastrophes. And most of the time, it’s all happening in public.

While some celebrities have frozen when faced with such situations, the majority of them can manage it like a real professional and laugh it off like nothing.

Take, for example, Miley Cyrus during the NBC New Year’s Eve special in 2022. While her act was going off without a hitch, the strap on her top snapped straight off in the middle of her “Party in the USA” performance. Rather than stop singing and skulk off-stage, the Hannah Montana singer tossed her shirt away, covered up her breasts with her arm, and went backstage to change into a blazer, with grace and professionalism.

As you can see, a wardrobe malfunction is almost unavoidable when you spend your days on the red carpet in edgy designer outfits surrounded by flashbulbs. Scroll down to see some of the most embarrassing celebrity wardrobe malfunctions caught on camera. Tara Reid is a victim. We can only show you the “before” picture because her wardrobe malfunction was so bad. In 2004, she was strolling the red carpet on her way to Puff Daddy’s birthday party when the strap on her dress slipped, exposing her entire breast. She would subsequently admit that she spent a lot of money on double-sided tape following that incident. Even Miley Cyrus, who isn’t afraid to expose a little skin, wasn’t expecting to perform topless on New Year’s Eve. During her 2022 live TV performance, the strap on her top snapped, causing her to cover herself with her arms and sprint off stage, where she grabbed a blazer to wear for the rest of her performance. She seemed to take it in stride, though and continued singing the rest of the song. Lil Nas X was expected to raise some eyebrows with his Saturday Night Live performance of “Montero (Call Me by Your Name),” but he wasn’t expecting to give quite so much of himself. While dancing, his pants split open, causing him to conceal his groin for the duration of the song. Not exactly the cheeky he was hoping for! Some celebrities are mortified by their wardrobe malfunctions and hope that no one notices. The Kardashians are another story. Although seeing a little more than we expected from a Kardashian sibling isn’t exactly surprising, the fact that Kourtney Kardashian herself posted this photo of a photo gone wrong on Instagram is. Hey, Kourtney, you could simply… don’t post an unintentional up-skirt photo! Camila Mendes, star of Riverdale, isn’t ashamed of her curves, even when her jeans have a two-sided structural breakdown. Following the incident, the actress was able to make a wisecrack (while covering her crack) on Instagram, stating, “Abandon hope all ye Brazilian booties who enter these jeans #rip.” Chrissy Teigen enjoys oversharing, and she doesn’t mind being somewhat dress-optional in her own house (at least according to Instagram). Even she was embarrassed when her dress slit tore five key inches, forcing her to cover her modesty with her pocketbook. A picture exposing the silhouette of her legs through her skirt may not be a huge concern for many ladies. However, when the woman in question is set to marry the future King of England, this sunny occasion turned into a severe wardrobe malfunction for Princess Diana. This image was printed in newspapers all around the country – the 1980s equivalent of going viral! Kim Kardashian was awarded at the WSJ Magazine’s Innovator Awards in 2021 for her shapewear brand Skims. When she stepped up, the zipper on the back of her form-fitting dress opened from the bottom up, almost exposing her Skims to the audience. Fortunately, she was able to re-zip before taking the stage. Phew! Oh, the wind, Kate Middleton’s biggest enemy. Kate wears a lot of dresses as a working royal, so she regrettably has more chances than the rest of us to be caught on video with a sudden gust threatening to reveal her royal secrets, so to speak. Maybe that’s why she’s been wearing pants as of late.

What happens when you combine an unpopular first daughter with an excessively thin and tight top and a place with possibly too much air conditioning? Nothing good, at least not for Ivanka Trump, who was widely criticized on social media for being a touch too nipply during the 2019 United Nations General Assembly. When Lenny Kravitz split his leather pants during a concert, all of his bits were exposed, it was one of the most shocking and epically NSFW wardrobe disasters of all time (which is why we are not posting that picture here!). For any nasty birds who are running to Google right now, it was in 2016! Mario Lopez, unlike Lenny Kravitz, wears underwear. How do we know this? Because he also split his pants in a critical location, but as he revealed on Twitter, he was wearing a pair of modest black underwear that kept him from displaying everything. But it’s still a little weird to see so much crotch on Twitter, isn’t it? The true question about Paris Hilton and wardrobe malfunctions isn’t “Has she had one?” but rather “Which one is safe enough to show on a family-friendly website?” Paris was a paparazzi favorite who appeared to not wear panties a lot in the early 2000s, which was a dangerous mix. Sometimes she was plain unlucky with the wind, as she was with this small outfit. Fortunately, she was dressed in tights for this one! Meghan Markle is always a class act, so there’s minimal risk of witnessing a flash of her underwear or any other clothing mishaps. But she did have an unpleasant moment when it became evident that she was wearing a garment with the price tag still attached, prompting the stunning question: Would she try to return it later? It takes a courageous lady to wear this daring dress on the red carpet of the Cannes Film Festival, and Bella Hadid is a brave woman! This garment was challenging to make, with the sole question being, “Will it be a nip slip or a crotch shot?” We’ll just say this: while we didn’t see Bella’s nipples, many folks got an answer to the question, “Is she wearing underwear underneath that?”