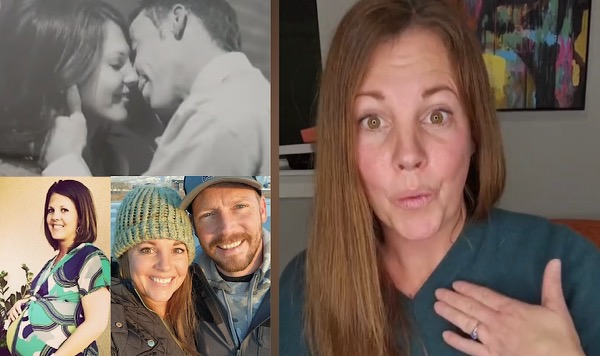 Oops! A 42 year old Utah woman named Marcella Hill is opening up about the moment she found out she accidentally married her cousin while pregnant with his baby!

RELATED: Free The Nipple! Facebook & Instagram Lift Ban On Bare Breasts, But Only For Transgender And Non-Binary Users

Oops! Utah Woman Finds Out She Accidentally Married Her Cousin While Pregnant With His Baby

Hill and her husband, Tage, have a blended family with four children, and they plan to celebrate their 12th wedding anniversary in March. 12 years ago, the cousins said “I Do” to each other “at a courthouse after work on a Wednesday.”

Hill shared her revelation on TikTok last Monday (January 9). In her caption, she wrote, “Funny story… I accidentally married my cousin. We had no idea our Grandma and Grandpa were first cousins. Oops.”

In the video, Hill recalls when she was pregnant and found out about marrying her cousin. “So, I’ve never publicly told anyone that I accidentally married my cousin. So, I was sitting on the couch, looking for names for the baby that we were about have, and I was on FamilySearch.

RELATED: Chrisean Rock Speaks Out After Being Kicked Out Of Interview Following Outbursts With Blueface

Hill, who is the CEO of Love Woolies in Utah and the author of ‘Wake Her Up,’ goes on to explain, “I look at this line and it’s all the same as mine. So, I think, ‘Oh no, no no. I think you’re still logged into my account.’ Then we start looking at it, and we realize, my Grandpa is his Grandma’s first cousin.

So, he calls his Grandma and I call my Grandpa and we ask them if they know each other. Sure enough. Sure do. They lived together when they were growing up as children. We are third cousins. We have won a prize for being the closest related in a neighborhood activity. And when I go to my family reunion, he gets to go to his too … at the same time.”

RELATED: 3LW Singer Kiely Williams Doubles Down On Having An ‘Entanglement’ With 3 Members From B2K! ‘It Was Only A One-Time Thing!’

Hill claims that as soon as they found out they were related, while pregnant, they looked up “the risks of having a child with your third cousin,” and the search results reassured them that “researchers suggest marrying third and fourth cousins is so optimal for reproduction because they sort of have the ‘best of both worlds.’”

#Socialites, be sure to check out the post below, then leave us your thoughts in a comment after!