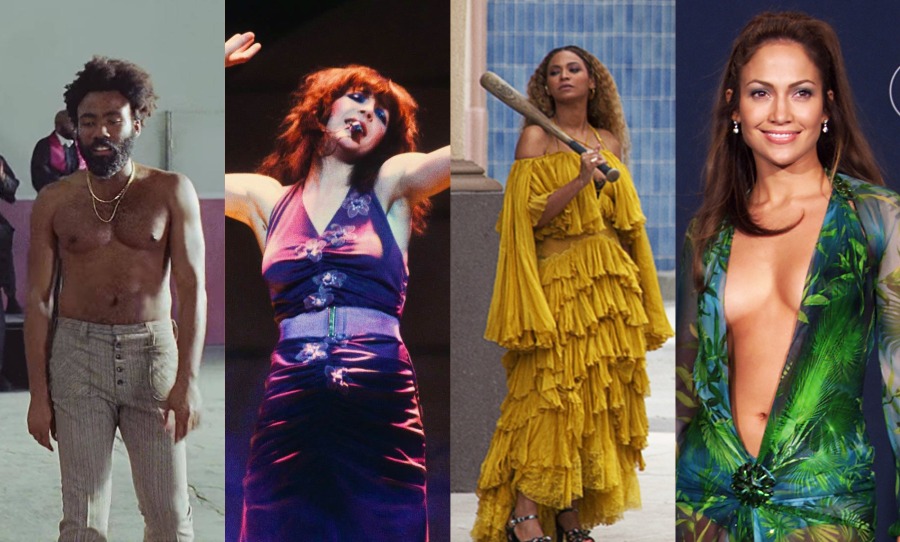 In a twittersphere where Madonna’s eleven-hundredth risqué Instagram post is a scroll away from obsolescence, here are the musicians who broke the internet, almost beyond repair.

With artificial intelligence looming large and the intelligence of TikTok influencers somehow growing smaller, it’s become increasingly difficult to break through on the internet in 2023. The excess of noise (unless you’re an ASMR fan) has made causing a legitimate stir online something of a rarity, to the point where even Madonna’s eleven-hundredth risque Instagram post is just a scroll away from obsolescence.

Thankfully (for those with the attention span of gnat), the music world has gifted the internet with an ocean’s worth of water cooler moments. Whether they’re getting politicians into a tizzy of inventing completely new avenues on the Wild Wild Web, these are 10 musicians who have broken the internet — almost beyond repair.

Childish Gambino indicts the USA with This Is America.

Childish Gambino broke music video records when he debuted the chilling visuals for his 2018 single This Is America. Taking an incisive look at race relations, slavery and police brutality in his home country, the Hiro Murai-directed clip garnered at its peak close to one million views per hour — spawning almost as many think-pieces, tweets and country-specific variations along the way.

Who among us can claim Google Images as their own invention? When Jennifer Lopez attended the 2000 Grammy Awards in a now-infamous Versace number, she unknowingly birthed an entire new search engine for Google, who created the image feature to keep up with unprecedented search demands for the dress. “At the time, it was the most popular search query we had ever seen”, former Google CEO Eric Schmidt admitted. “So Google Image Search was born.”

this dress was the reason google images was invented https://t.co/9vml4xz5vr pic.twitter.com/uSaEUy2HPB

Lil Nas X’s business savvy is matched only by that of Jordan Belfort, a fact most apparent following the release of the music video for Montero (Call Me By Your Name). The video sees the singer pole-dance his way down to hell before giving Satan a lap dance, and was more than enough to elicit the wrath of right-wing twitter, which promptly set ablaze following its release.  Lil Nas went on to promote the single by selling Nike look alike sneakers supposedly dipped in human blood, sparking a bitter trademark legal battle with the shoe company. Naturally, given the shoes’ gory origins, chaos ensued on the Wild Wild Web.

Often credited with popularising the surprise-release method, Beyoncé’s album Lemonade was rightfully the talk of the town upon its 2016 release. It marked the pop-star’s most vulnerable body of work to date, detailing the stages of grief she overcame in the wake of Jay-Z’s infidelity. Naturally, the album’s juicy tidbits and shock arrival sent the internet into a tailspin, and broke records when Beyoncé occupied 12 spots on the Billboard charts simultaneously.

Kate Bush runs up that hill

It was difficult to escape the certified sound of 2022, a song which was actually first released in 1985. Kate Bush’s spacey earworm Running Up That Hill made the rounds on TikTok last year, following its inclusion in the fourth season of the Netflix series Stranger Things. So ubiquitous was the track that it reportedly earned Bush $2.3million in streaming revenue, and placed the singer atop the charts in over four countries.

Though it somewhat pales in comparison to his more perilous antics in recent years, Kanye West’s interruption of Taylor Swift’s 2009 MTV VMAs speech nonetheless lives on in music infamy. Swift, who was accepting the award for Best Female Video before West claimed Beyoncé was more deserving, would keep the memory of the rapper’s interjection with her in future releases. West, of course, claimed the moment made Swift more famous.

Styrofoam fingers will never be the same again. In 2013, at the height of her overhaul of her Disney Channel image, Miley Cyrus graced the stage at the MTV VMAs and delivered a head-scratching performance alongside Robin Thicke. The three-song medley included, but was not limited to, twerking in flesh-coloured bikinis, using a foam finger for anything other than its original purpose, and enough protruding tongues to moisten the sticky bit of every envelope under the sun.

In 2014, Beyoncé, Solange and Jay-Z boarded an elevator that would go down in history. Fresh from their appearance at that year’s Met Gala, the musician trio erupted into conflict when Solange appeared to lunge for Jay-Z, while his wife appeared unfazed. Footage of the incident went gangbusters, and resulted in Beyoncé releasing a statement minimising the apparent attack. The pop-star would later reference the altercation in 2016’s Lemonade.

Super Bowl halftime shows are headline-grabbing in their own right, but they took on an even more salacious meaning in 2004, when Justin Timberlake and Janet Jackson performed a joint rendition of Rock Your Body. Seconds before the performance was over, Timberlake “accidentally” tore off Jackson’s costume, exposing her nipple to the audience and millions of viewers. Timberlake issued a decade-late apology for the blunder in 2021.

The incident made Jackson the most-searched person on Google in both 2004 and 2005,  and, at the time, broke the record for most-searched event over one day. YouTube co-founder Jawed Karim credits the incident with leading to the creation of the video platform, while Miriam-Webster cites it as the genesis of the term ‘wardrobe malfunction’.

Given his penchant for controversy, it’s fitting that Kanye West occupies two entries on this list. In 2016, the rapper debuted an eye-popping music video for Life Of Pablo lead single, Famous, depicting naked wax figures bearing the likeness of everyone from Taylor Swift to Donald Trump. The video reignited the age-old beef between Swift and West, after the former claimed she had not consented to being name-dropped or referred to in Famous.